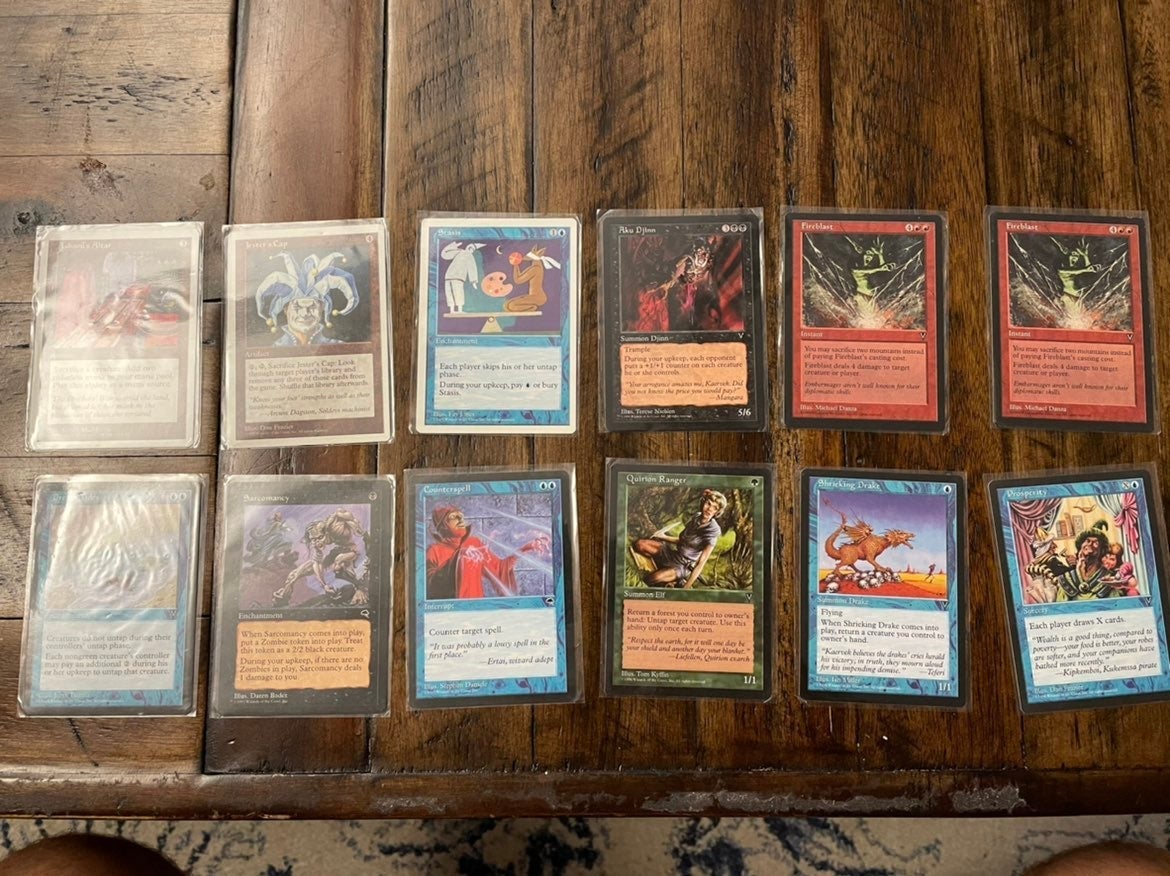 I don’t have many of these cards, so I put the rarest ones in a single lot. These have never been used and are in perfect condition. They are all in plastic sleeves as well. List: Ashnod’s Altar Jester’s Cap Stasis Aku Djinn Fireblast x2 Dream Tides Sarcomancy Counterspell Quirion Ranger Shrieking Drake Prosperity

Latest News
Demand Strong at the Top of the Gulfstream Market

Following an incident in which a 1-20 shot he trained and owned was pulled up and eased shortly after the ...

It's been a remarkable few weeks for LNJ Foxwoods and Jaime Roth, with the outfit accomplishing the rare double of ...

The fifth and final pool of the Kentucky Derby Future Wager (KDFW), which was scheduled for Mar. 31-Apr. 2, will ...

Though Secret Oath (Arrogate) will meet males Saturday in the GI Arkansas Derby, Hall of Fame trainer Wayne Lukas has ...

State Of Rest Races On For Newgate Partners

Remember Ben with a gift to Thoroughbred Aftercare.

Well-related Stonestreet Stables product Marsalis (Curlin–Hot Dixie Chick, by Dixie Union) stepped forward off a stellar debut outing to garner the 'TDN Rising Star' distinction Saturday at Fair Grounds. Beaten a head and 5 1/4 lengths clear of third in a salty GII Risen Star S. day heat won by Todd Pletcher-trained invader Momentous (Speightstown) Feb. 19, the Steve Asmussen pupil was off at 3-5 and soon showed why. Off at 3-10 while breaking from the fence, the $340,000 Keeneland September RNA broke well but had to work a bit early to eventually make the front narrowly. He doled out an opening quarter of :21.76, and was challenged through a :44.80 half by longshot Lagoon (Runhappy) as that one launched a sweeping move. Marsalis re-broke at the head of the lane, put his stubborn foe away by midstretch, and was wrapped up late to don cap and gown by 2 1/2 lengths. Vinco (Quality Road), last year's $1.5-million Fasig-Tipton Midlantic topper, bounced back from a non-show last out to complete the exacta. Lagoon checked in fourth. Marsalis is the sixth foal out of his connections' speedy 'Rising Star' Hot Dixie Chick, winner of the 2009 GI Spinaway S. and already the dam of Pauline's Pearl (Tapit), MGSW, $1,038,500; and 'Rising Star' Union Jackson (Curlin), MSW & GSP, $273,874. The former took the GIII Houston Ladies Classic S. Jan. 30 and was most recently a close second in the GII Azeri S. two weeks ago; while the latter, who stands at Sequel Stallions in New York, was represented by his first black-type winner earlier this month. Hot Dixie Chick is also a half to 2017 GI Kentucky Derby hero Always Dreaming (Bodemeister) and Grade II winner Positive Spirit (Pioneerof the Nile). She produced a Constitution colt last term before being bred back to both Tapit and Quality Road. A 'Rising Star' himself, Curlin has now sired 20 horses to earn that moniker. For more on Marsalis as part of Steve Sherack's Second Chances series, click here.

View All Rising Stars back to 2004

Jaime Roth of LNJ Foxwoods joined this week's TDN Writers' Room to talk about their current runners Olympiad and Lighthouse and also share stories of her time in the industry. ...

Girls REI hiking khaki pants 4-5
Horses, Not Humans, Back at the Epicenter

First things first: let's give their chance to the guys off the bench. Okay, so there are going to be plenty of eyeballs rolled now that three of Bob Baffert's ...

Subscribe for FREE to the Daily PDF or the News Alerts.

Never miss another story from the TDN